In general lines, the grinding circuit is composed of a powdering or pulverizing process and a classification process. In most sites a ball mill is used for grinding, to produce fine particles, and a (hydro) cyclone is used for classification, to separate the fine particles from larger particles. The main objectives when controlling the grinding circuit are to maximize the throughput and to decrease the variability of product size and % solids. Material that meets the product size requirements is removed from the circuit and oversized material is recycled back to the grinding mill for further comminution. To achieve these objectives the slurry needs to be continuously monitored and controlled, allowing process stabilization and ensuring optimal grinding conditions. 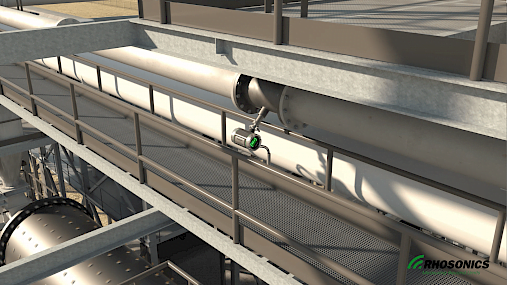 Example of a Rhosonics density meter (SDM), installed in the ball mill discharge

Measuring technologies, such as density meters, efficiently help operators to monitor and control the grinding circuit, optimize it and prevent process failures. When used together with an advanced control system, density readings allow to automatically control valves, pumps and have an efficient water addition, resulting in the improvement of the process that can lead to a higher recovery.

In the grinding circuit, possible installation points are in the ball mill discharge and feed (recirculation), (hydro) cyclone feed, overflow, and underflow.

Example of a Rhosonics density meter (SDM), installed in the ball mill discharge

The grinding circuit can be considered as the first step of a processing plant, therefore, operators need to have good control over it. One way to follow changes in the circuit is by measuring slurry density, which is done manually in many sites. The manually taken density sample can be used as a parameter to indicate if the grinding process is operating steadily.

However, manual sampling does not allow to have a trend for real-time control, so it is recommended to use an in-line measuring device, allowing for detecting changes online (real-time) as it happens. As an example, a recommended application to efficiently dose grinding media (balls) and water into the ball mill is measuring density changes in the ball mill discharge.

Why control over parameters is important

In this paragraph, we will explain why control over parameters, such as the particle size and slurry density, is important to reach an efficient classification process.

The cyclone utilizes centrifugal force to accelerate the settling rate of slurry particles and separate them according to size, shape, and specific gravity.

Due to centrifugal forces, faster settling particles (coarse) move to the wall of the cyclone, where the velocity is lowest, and migrate to the underflow. Slower-settling particles (fines) move toward the zone of low pressure along the axis and are carried upward to the overflow.

A certain slurry density is needed for the optimal (re)classification of particles in the cyclone. The cyclone has proved extremely efficient at fine separation sizes. However, for middle-size particles, this process is less efficient. 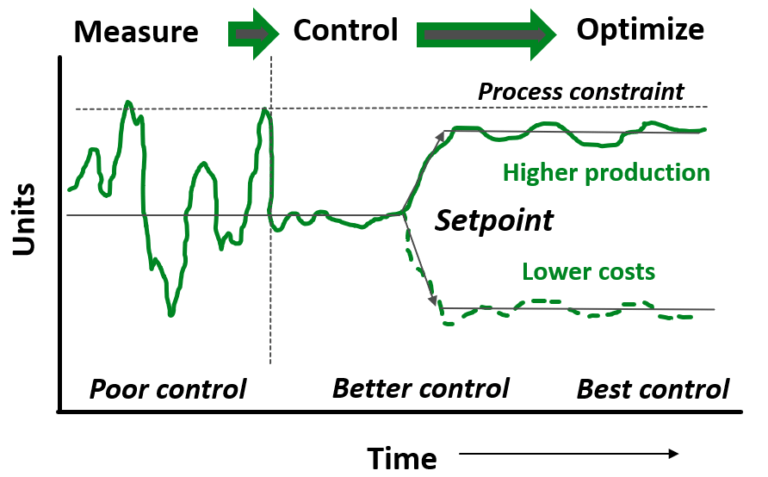 When too much water is added to the process, more middle-size particles are produced by the ball mill, so the cyclone overflow allows a lot of these middle-size particles to escape the grinding circuit. This results in a decrease in the material that the ball mill would have to grind, which lowers its efficiency. Also, unwanted particle sizes are leaving the grinding circuit for the next process stages.

For optimal classification of particles, it is important to detect changes in real time in the cyclone feed. Optimal control of the cyclone can be achieved by controlling the % solids in the feed flow to the desired target, which is done through the use of a density meter. The cyclone overflow and underflow can also be monitored by density meters. Other crucial parameters to be monitored are the pressure and particle size.

Use of density to prevent problems

In this part, we describe the use of density to prevent problems with circulating load and as a variable in a backup system for the particle size analyzer (PSA).

If the cyclone keeps returning ore to the ball mill, the total volume of ore will be increasing in the grinding circuit, as is the density of the slurry. The recirculating ore is also called the circulating load. If the grinding process becomes less efficient, the circuit load will climb until its volume is greater than can be handled.

The density meter can be applied in the grinding circuit as a warning system. Thanks to real-time density measurement, an increase in circulating load can be detected on time, to be able to control the process before problems become unmanageable.

The predicted value was based on the slurry feed density, volumetric flow rate, and pressure drop over the cyclone. Using these variables in a model, they were able to calculate the predicted value, which was done every five minutes.

At a certain moment the PSA’s value was lost, when it came back, the predicted value was still in close agreement with the actual value. This eliminated problems associated with periods of unavailability of the particle size analyser. This was described by Mr. B.J. du Plessis in a paper about control strategies at the Palabora Mining Company and was published in the Journal of The South African Institute of Mining and Metallurgy. 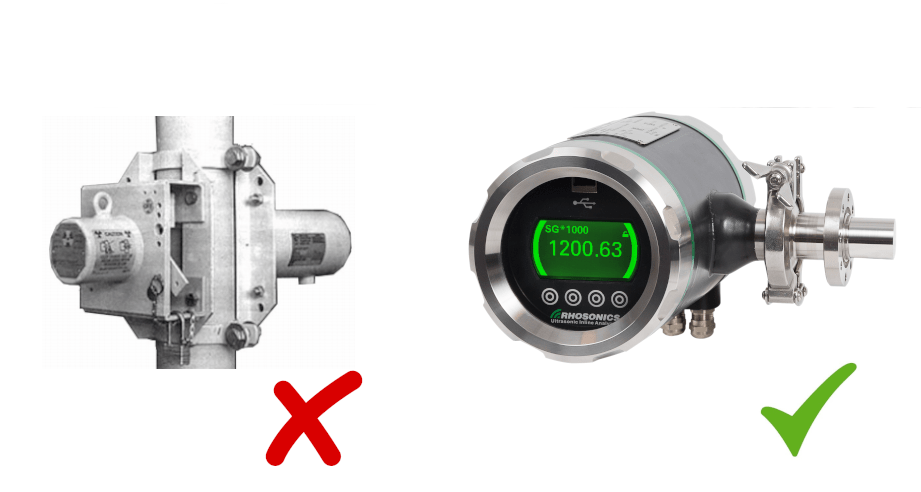 Density measurement is usually done by radiation-based measuring devices. This technology has been used in the mineral processing industry for decades. However, nowadays governmental regulations are getting stricter and associated costs are increasing. More nuclear density meters are being replaced by alternatives. These alternatives can do the same job, without administration costs and health and safety risks related to the nuclear source.

The eco-friendly Rhosonics Slurry Density Meter (SDM) has been introduced in 2016 and is the first real alternative to substitute nuclear density meters, reaching hundreds of installations worldwide in just a few years.

Please contact Rhosonics if you want to have more information about our density meter (SDM).

For more information about Rhosonics, please take a look on our LinkedIn, Instagram or Twitter page. For questions, you can contact us directly or take a look on this page to get in touch with your local distributor.